Humans: The Number One Threat to Wildlife 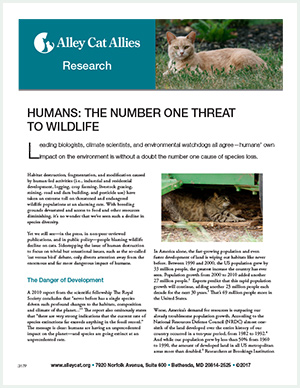 Leading biologists, climate scientists, and environmental watchdogs all agreehumans’ own impact on the environment is without a doubt the number one cause of species loss.

Habitat destruction, fragmentation, and modification caused by human-led activities (i.e., industrial and residential development, logging, crop farming, livestock grazing, mining, road and dam building, and pesticide use) have taken an extreme toll on threatened and endangered wildlife populations at an alarming rate. With breeding grounds devastated and access to food and other resources diminishing, it’s no wonder that we’ve seen such a decline in species diversity.

Yet we still seein the press, in non-peer-reviewed publications, and in public policypeople blaming wildlife decline on cats. Sidestepping the issue of human destruction to focus on trivial but sensational issues, such as the so-called “˜cat versus bird’ debate, only diverts attention away from the enormous and far more dangerous impact of humans.

The Danger of Development

A 2010 report from the scientific fellowship The Royal Society concludes that “never before has a single species driven such profound changes to the habitats, composition and climate of the planet…”1 The report also ominously states that “there are very strong indications that the current rate of species extinctions far exceeds anything in the fossil record.” The message is clear: humans are having an unprecedented impact on the planetand species are going extinct at an unprecedented rate.

Worse, America’s demand for resources is outpacing our already troublesome population growth. According to the National Resources Defense Council (NRDC) almost one-sixth of the land developed over the entire history of our country occurred in a ten-year period, from 1982 to 1992.4 And while our population grew by less than 50% from 1960 to 1990, the amount of developed land in all US metropolitan areas more than doubled.5 Researchers at Brookings Institution predict that by the year 2030, half of the buildings in which we live, work, and shop will have been built after the year 2000.6

Our rapid expansionand even faster use of resourceshas destroyed or disconnected vital wildlife habitat. Since Europeans first settled the continent, 27 ecosystem types have already declined by as much as 98%.7 Most of the species who call these ecosystems home are not adaptable to the human landscape that is left them. If our current development and population growth continue unchecked, the serious loss of animal species will continue for decades to comeunless we do something now to address the human threat.

The Human Impact on Birds

Opponents of Trap-Neuter-Return, the sound and effective approach for feral cat colonies, often blame cats for bird species decline, but humans are by far the biggest threat to bird species. The exponential population growth and vast expansion discussed above has left little land untouched by human development, modification, fragmentation, and pollution.

And so millions of bird deaths occur every year due to human activitiesnearly 100 million from colliding with windows, 80 million from collisions with automobiles, and about 70 million from exposure to pesticides.8 Our own government tracks how many animals (birds included) it killsover 4 million in 2009 alone.9

In a 2000 report by the World Conservation Union surveying 1,173 threatened bird species, habitat loss was the most important threat, affecting 83% of the bird species sampled. As the World Watch Institute put it (emphasis added):

“…[P]eople have always modified natural landscapes in the course of finding food, obtaining shelter, and meeting other requirements of daily life. What makes present-day human alteration of habitat the number-one problem for birds and other creatures is its unprecedented scale and intensity.10”

Cats are a Natural Part of the Landscape

Cats have always been part of the natural environmentthey have lived outdoors for over 10,000 years. While they have adapted to the changes people brought about in the environment, their biological instincts and interactions with their surroundings have not changed.

What has changed in the last 10,000 years is how people have impacted the environment. Our unrestrained use of natural resources has damaged the crucial habitats and resources species need to survive.

Instead of pointing a finger at cats, we must take a hard look at what we can do to change the way we impact our world and the animals we share it with. We have the ability to conserve our natural places, minimize our impact on wildlife habitat, and build responsibly. To make a difference, we must align our attention and resources to offset the biggest offender in habitat destruction and species declineourselves.