ALBANY, N.Y. – June 4, 2019 – Alley Cat Allies congratulates New York for becoming the first state to pass a bill prohibiting the declawing of cats. Today both the New York Assembly and Senate passed the bill, which will now be delivered to the desk of Gov. Andrew Cuomo. 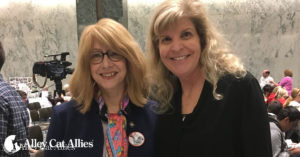 “Cats rely on their nails, or claws, for behavioral and grooming needs. For a cat, declawing is both psychologically and physically harmful because it is amputating the last bone on each of a cat’s toes,” said Becky Robinson, president and founder of Alley Cat Allies. “The surgery is traumatic and the resulting disfigurement causes severe pain. Many cats develop negative behaviors because of this and lose their home as a result.

“So on behalf of the half-million supporters of Alley Cat Allies, I applaud the New York legislature for passing this bill. We offer our strong support for Gov. Cuomo to sign the bill into law and take the momentous step of making New York the first state to ban declawing.”

Alley Cat Allies worked closely with The Paw Project to urge legislators to pass the bill.

“New York has set a new national standard for the humane treatment of cats with this decision,” said Dr. Jennifer Conrad, founder of The Paw Project. “I was honored to work on this bill with Assemblymember Linda Rosenthal and Senator Michael Gianaris and am thrilled beyond measure to see it pass.”

Robinson added that while declawing is often done to address unwanted scratching behavior, there are many humane and affordable options available such as scratching posts, vinyl nail covers and humane deterrents.

Because of the pain and trauma that declawing causes for cats, Alley Cat Allies launched its “Keep Cats’ Claws on their Paws” campaign to push for declaw bans throughout the United States. In New York, Alley Cat Allies supporters sent more than 1,000 messages to legislators to press for a ban on declawing cats.

Alley Cat Allies, headquartered in Bethesda, Md., is the global engine of change for cats. We protect and improve the lives of cats through our innovative, cutting-edge programs. We are seen around the world as a champion for the humane treatment of all cats. Founded in 1990, today Alley Cat Allies has more than a half-million supporters and helps tens of thousands of individuals, communities and organizations save and improve the lives of millions of cats and kittens worldwide. Its website is www.alleycat.org, and Alley Cat Allies is on Facebook, Twitter, Instagram and YouTube.