Another city in the Lone Star State is considering implementing a lifesaving Trap-Neuter-Return (TNR) program. Alley Cat Allies Director of Programs Alice Burton and Director of Communications Coryn Julien headed to Pearland, Texas, this week to educate the city council about TNR—and how a TNR program is the best way forward for Pearland’s cats and community. 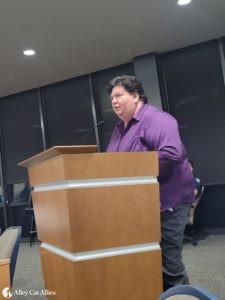 Alley Cat Allies Director of Programs Alice Burton speaks to the Pearland City Council about the lifesaving impact of TNR.

As a former chief of animal control, Alice speaks from experience and her heart on the incredible impact of TNR for cats and communities.

“The council and Mayor Kevin Cole were engaged and positive about starting a TNR pilot program, so I’m very hopeful about the future for community cats and their caregivers in Pearland,” said Alice. “I offered Alley Cat Allies’ support and expertise to help them take this important step, while explaining that I know, firsthand, how TNR can truly be transformative when community members are engaged and respected. I believe they heard me.”

For some councilmembers, the concept of ensuring the safety of cats outdoors seemed new. Throughout the night, they learned why TNR is the only humane and effective approach to community cats, or unowned cats who live outdoors. Through TNR, cats are humanely trapped, spayed or neutered, vaccinated for rabies, eartipped, and then returned to their outdoor homes. Not only is it sound public policy that addresses the community cat population, it also reduces shelter intake and “euthanasia” numbers and reduces calls to animal services.

Alley Cat Allies offered our assistance and expertise in getting a future TNR pilot program off the ground, including the funding and strategy required.

The best part: There’s no need for Pearland to reinvent the wheel. Alley Cat Allies has worked in Texas for decades, bringing policies for cats out of the dark ages of impounding cats in shelters and killing them. Today, communities across the state have enjoyed the benefits of years-long TNR programs and can speak to TNR’s success firsthand.

Among those communities is Pearland’s neighbor, Fort Bend. Alley Cat Allies actively supported Fort Bend when county commissioners there adopted a TNR-friendly ordinance in 2018, and we worked closely with Fort Bend County Animal Services to set up their TNR program. More than 4 years later, it is one of the biggest and most successful TNR programs in the state.

Thanks to TNR, Fort Bend County’s save rate for cats rose from 53 percent—with around 600 cats killed each year–to over 94 percent, with cats only humanely euthanized for untreatable illnesses and injuries. Additionally, concern calls to animal control regarding cats has decreased by more than 50 percent—which is what every city wants to hear. We look forward to helping Pearland enjoy the same success. Cats in the city have strong allies in Alley Cat Allies, local animal organizations, and local advocates—including those who also attended the city council hearing to make their voices heard.

By establishing a TNR program focused on spay and neuter and vaccinations of cats, Pearland’s cat population will be managed, community members will know their compassion will not be criminalized, and cruel, ineffective lethal approaches can finally be left in the past.