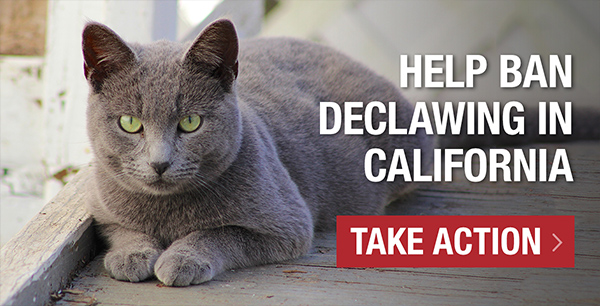 Maryland became the second state in the nation to outlaw cat declawing yesterday, and we can keep up the lifesaving momentum! Right now, California is considering its own declawing ban—and is poised to become the third state to bring an end to this invasive and painful surgery that only rarely has medical benefit for cats.

If you live in California, ask your legislators to vote YES on the statewide declawing ban, A 2606!

Let the committee know that declaw surgery is not a nail trim, but a surgical amputation of the last joints of a cat’s toes that has lifelong negative consequences for the cat. Without their claws, cats can’t perform natural behaviors. A declawed cat is more likely to exhibit increased aggression and biting to compensate for losing his protective claws, which are his first line of defense. Declawing leads to chronic pain, arthritis, balance issues, and back problems.

Alongside New York and Maryland, 13 major cities in the United States have already banned declawing to protect the wellbeing of cats. This is our chance to ensure California joins them!

Learn more and spread the word at alleycat.org/StopDeclawing.