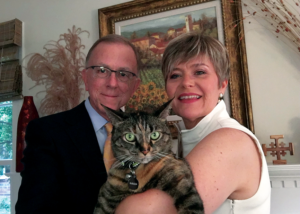 Ray Harry and Sheila Ward with their cat Alakazam.

For Sheila Ward and Ray Harry, including Alley Cat Allies in their estate planning made perfect sense.

Since early childhood, Sheila remembers admiring her grandmother, who took in abandoned kittens and puppies, nursed them back to health, and found their forever homes. Although she was surrounded by different animals, Sheila was most enthralled by cats.

Sheila’s passion for helping community cats grew as she volunteered in Louisiana in the aftermath of Hurricane Katrina, alongside Alley Cat Allies volunteers. “I was struck by the knowledge and commitment of these volunteers and was delighted to learn that there was a group dedicated to advocating for cats who live outdoors.”

Ray’s fondness for cats also grew after witnessing Sheila’s dedication to caring for them. She advocates for cats by speaking about the importance of neutering and caring for community cats. Ray provides invaluable support and does his part to care for their own cats, so Sheila can devote her time to volunteering with local animal groups.

When asked why they decided to add Alley Cat Allies in their estate plan, they said: “We believe that Alley Cat Allies is probably the most effective organization advocating for cats in the world. We love cats and have been strongly impressed with the scope of Alley Cat Allies’ success in helping them.”

To anyone making their financial plans, Sheila and Ray advise, “Adding Alley Cat Allies to our estate plan was quite easy. When making a will, it’s simple to add in a clause that leaves something … to Alley Cat Allies, in order to help all cats beyond our lifetime.”