The Boardwalk Cats Project is a city-endorsed Trap-Neuter-Return (TNR) program that brings together community leaders, advocates, and the public to protect and improve the lives of the cats who live along the Atlantic City Boardwalk in New Jersey. It is one of Alley Cat Allies’ most successful initiatives and an accomplishment of which we are very proud.

Since 2000, Alley Cat Allies’ Boardwalk Cats Project has cared for and defended these famous Boardwalk Cats. Each cat has been humanely trapped, spayed or neutered, and vaccinated. In the first two years of the project, more than one-third of the catswho were kittens and socialized adult catswere adopted.

The cats who continue to live at the two-mile boardwalk, which is their home, sport an “eartip.“ An eartip is used worldwide in TNR programs to signify that a cat has been spayed or neutered and vaccinated.

The Boardwalk Cats are beloved members of the Atlantic City community. They delight residents and tourists alike, and even make regular visits to local businesses.

If you visit Atlantic City, you might see the cats lounging underneath the docks or basking in the sun. Alley Cat Allies monitors the cats in each colony every day, ensuring they have food, water, shelter, and veterinary care when needed.

A Brief History of the Boardwalk Cats Project Misu is a beloved member of the community.

The Boardwalk Cats Project is an innovation that saved cats’ lives.

For many years, kind caregivers came from all over the Atlantic City region to the Boardwalk every day to care for the resident community cats and enjoy their company.  They formed a network and set out to take the cats and kittens to veterinarians to be spayed and neutered. They even obtained a foundation grant to help with the veterinary costs. However, veterinary services for community cats, including spay and neuter, were hard to come by in those days. The caregivers were seeking help and finding no assistance.

They soon learned what would happen if the “˜authorities’ became involved. In 2000, a single call to animal control lead to cats being trapped and more scheduled to be. A mother cat was removed and killed and her small newborns were left to perish.

The caregivers needed immediate help defending the Boardwalk felines, so they called Alley Cat Allies. We did not hesitate to take action.

Our first objective was to mobilize the community to end the killing. After a successful meeting with the city’s health department director, Ron Cash, we formed the Cat Action Team (C.A.T.) with the director and his staff, the Humane Society of Atlantic County, and the caregivers and advocates.

We know firsthand that grassroots organizing is key to ending bad policy and protecting cats. In Atlantic City, this fundamental tactic was instrumental in fostering teamwork and collaboration, and ultimately a new policy that banned animal control from rounding up and impounding the cats.

Under our leadership, the C.A.T. immediately implemented a TNR program. We also worked with the Department of Public Works, who helped us develop the high standards we wanted for the cats. We educated the public about the benefits of TNR and the facts about community cats, who live and thrive outdoors.

The effort became formally known as the Boardwalk Cats Project, and its impact has been profound.  No kittens have been born on the Atlantic City Boardwalk in years, and the remaining cats are living long lives where they belong: in their outdoor homes. Our Boardwalk Cats Project is more than a TNR program; it represents our strong partnership with the community. Alley Cat Allies helped Atlantic City with its recovery after the devastation of Hurricane Sandy. Through workshops and informative Boardwalk signs, we also continue to provide humane education about the Boardwalk Cats.

As an added bonus for the community, Alley Cat Allies and volunteers help beautify the Boardwalk by hosting regular clean-ups.

Our Boardwalk Cats Project is ongoing proof that TNR is a humane and effective approach that benefits outdoor cat populations and the larger community. It is a model and inspiration for cities and towns everywhere, and it is all possible thanks to the generosity of our supporters.

The next time someone questions whether Trap-Neuter-Return is the only humane and effective approach to community cats, tell them about the Boardwalk Cats Project.

Over the past couple of decades, the project has benefitted the community and allowed the Boardwalk Cats to live full, healthy lives in their outdoor homes.

Without our Boardwalk Cats Project, many of these beloved cats would have been caught, brought to animal shelters, and killed.

Alley Cat Allies believes that every cat deserves the best possible chance at a long, full life. TNR provides that opportunity, and the Boardwalk Cats Project illustrates why every community should have its own TNR program. 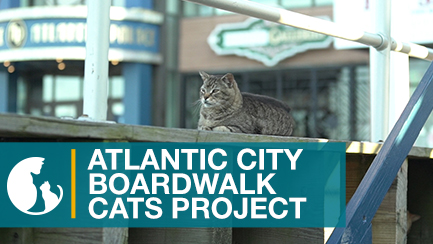