In April 2015, Texas veterinarian Kristen Lindsey posted a picture of herself on Facebook holding a cat by an arrow through the cat’s head and bragged about the kill. The incident caused huge social media outcry, but Lindsey was not charged with animal cruelty due to lack of evidence. However, the Texas Board of Veterinary Medical Examiners responded by moving to revoke Lindsey’s veterinary license in October 2015. Lindsey has been fighting to keep her license since then.

Alley Cat Allies has been involved with the case, following its progress along with cat advocates and groups across the country in hopes that justice will be served. Alley Cat Allies wants to thank Texas attorney Ryan Clinton for helping us draft and file our amicus brief asking the state of Texas to revoke Lindsey’s veterinary license. He helped us make our voice heard in this case.

A hearing on revoking Kristen Lindsey’s veterinary license was held April 25-26, 2016. The hearing will determine whether Lindsey retains her license or has it revoked so she cannot continue practicing veterinary medicine in the state of Texas. Lindsey will provide her account of the incident, defend her professional character, and argue that she should keep her veterinary license. The attorney for the Texas Board of Veterinary Medicine will submit exhibits that contain evidence of Lindsey’s cruelty, and argue that only revoking Lindsey’s license will “sufficiently protect the public from [Lindsey’s] poor professional character”.

Alley Cat Allies hopes that Lindsey’s veterinary license will be permanently revoked. She breached the veterinary code of ethics with her cruel act, and she lacks the compassion and empathy required to care for animals.

The second day of the hearing is underway. The Texas Board of Veterinary Medical Examiners (TBVME) has one more witness to testify. Then Lindsey and her witnesses will take the stand. Today, Lindsey will be defending her right to retain her veterinary license and arguing that her actions were not cruel and do not reflect poorly on her professional character.

The TBVME’s witness for today is William Folger, D.V.M. Dr. Folger is the Feline Regent of the American Board of Veterinary Practitioners. He is a renowned veterinarian and feline specialist from Houston, Texas. Dr. Folger testified on the “identity of the cat killed by Respondent (Lindsey), professional standards and generally accepted conduct”.

Dr. Folger stated that he believes the cat in Lindsey’s Facebook photo and a live shot of Tiger depict the same cat. This is a professional stating that, based on distinctive markings, Tiger is indeed the cat that Lindsey killed. He also said that evidence in the photo shows that the cat had been neutered, which means he was not an unneutered feral tomcat as Lindsey claimed. He also stated that most feral cats don’t grow to the pictured cat’s size, and the cat’s condition was consistent with an owned cat.

Dr. Folger believes that, based on the flexing of the cat’s legs, the cat was absolutely alive when Lindsey’s photo was taken. This was not “euthanasia”, as Lindsey claimed, because the death was not quick and the cat suffered.

Regarding Lindsey’s Facebook post, Dr. Folger was shocked and bewildered that a colleague could kill a cat in such a cruel and brutal manner. He was stunned at Lindsey’s smile in the picture and her joy at having killed a companion animal.

Kristen Lindsey’s selected witnesses will testify today after Dr. Folger. The order will be as follows:

The hearing has concluded.

After these final testimonies, the state administrative court concluded the two-day hearing on whether Kristin Lindsey will lose her Texas veterinary license. Lindsey will keep her license for now, but an outcome has not been decided. Both sides need to provide written closing arguments by June 10, and must respond to the other party’s closing argument by July 1. A ruling is expected later this year. Transcripts of the hearing will be available on May 20.

After compelling testimony from the Texas Board of Veterinary Medical Examiner’s (TBVME) witness, Dr. Folger, Kristen Lindsey’s witnesses testified. They focused mainly on feral cats, and argued that Lindsey killing the cat was not an act of cruelty. Preston Northrup, who owns property and livestock, talked about his personal experience with feral cats, claiming that he killed them to protect his animals and that others were in the right to do so. Karen Chapman and Dr. Paul Smith targeted Trap-Neuter-Return (TNR) in their testimony, claiming that it was ineffective. Chapman said she believed it was too expensive to neuter, vaccinate, and declaw all feral cats. She displayed a lack of understanding of the TNR process, which does not include declaw.

Dr. Folger’s testimony that the cat was alive when Lindsey’s Facebook photo was taken further illuminated the cruelty of Lindsey’s actions. As a veterinarian, Lindsey is trusted to uphold a set of standards that includes compassion and care for the lives of animals. She displayed none of these things when she posted her photo and took pride in the kill.

Alley Cat Allies hopes that Lindsey’s veterinary license will be revoked completely so she can no longer practice veterinary medicine in the state of Texas. We will continue to stay involved and keep you posted on any developments in the case. 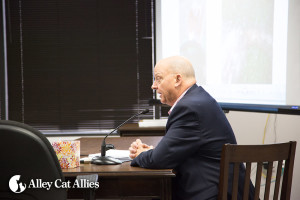 Dr. Folger, testified on the “identity of the cat killed by Respondent (Lindsey), professional standards and generally accepted conduct”, the final witness for the Texas Board of Veterinary Medical Examiners (TBVME). Kristen Lindsey, testifying on her own behalf. Preston Northrup, testifying regarding “his personal experience with feral cats. Mr. Northrup owns property and livestock, and has killed several strays to protect his animals”.

Kristen Lindsey’s hearing begins today. Alley Cat Allies’ Staff Attorney, Misty Christo, is on site in Austin, Texas at the W.P Clements State Office Building where the hearing is being held. Kristen Lindsey is present with her attorney Brian Bishop, and Michelle Griffin, attorney for the Texas Board of Veterinary Medical Examiners (TVBME), submitted exhibits. Zandra Anderson with Tiger’s Justice Team, a group advocating against Lindsey, and Lora Dunn from the Animal Legal Defense Fund are also present.

The first two witnesses testifying for the TVBME are Clare Johnson and Bill Johnson, the owners of Tiger. Tiger is, allegedly, the orange and white cat who Lindsey shot and killed with a bow and arrow. They are expected to provide testimony on “Identity of the cat killed by Respondent (Lindsey), lack of consent for the killing, and generally accepted conduct”. Their estimated testimony times are 45 and 15 minutes.

Other witnesses for the TBVME who will testify today are as follows:

The TBVME’s attorney proceeded on the theory that the cat Lindsey killed was Tiger. However, during her testimony, Lindsey made efforts to prove that the cat was not Tiger. She claimed that the cat she killed was a “tomcat”, or unneutered male cat, and did not fit Tiger’s features.

Lindsey and her attorney, Brian Bishop, attempted to vilify feral cats to support their argument. They said that feral cats are an issue that needs to be managed, and that Lindsey’s actions were justified.

Alley Cat Allies believes that it should not matter whether or not the cat was Tiger, or whether or not he was feral. There is very compelling evidence that the cat is Tiger, but even if he wasn’t an owned cat, his life was just as important and precious. All cats deserve to live, and Lindsey’s actions were just as terrible and cruel if the cat was feral. As a veterinarian, Lindsey took an oath to protect and help animals. She violated that oath when she killed a cat so cruelly and took pleasure in it.

Keep watching this page for more updates as the hearing progresses. Clare Johnson testifying that the cat in the photograph [pictured] Kristen Lindsey posted with an arrow through his head was her cat, Tiger.