In the dead of night on December 17, 2020, community cats living on the Stockton Breakwall in the city of Newcastle, New South Wales (NSW), Australia, became victims of what was called a “cull,” a word that whitewashes the reality of what occurreda brutal and pointless slaughter.

Alley Cat Allies is not only pursuing justice for the cats killed and maimed in this senseless attack, we are advocating for long-term policy and mindset shifts rooted in compassion for all animals. We are working toward an expansion of humane management programs, including Trap-Neuter-Return (TNR). And, we are standing strong against the Australian government’s plan to wipe out community cats on the continent, which is a barbaric and impossible scheme.

This is what occurred in Newcastle, and why immediate and unwavering action in defense of cats is critical. 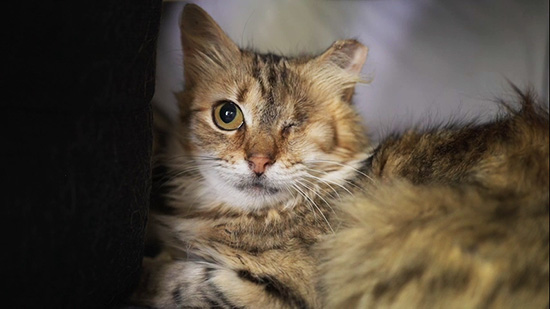 Rosie, who was shot in the eye during the botched cat cull. Thankfully she survived and is recovering in a new home.

The Cats Were Cared For, But Still Targeted

For years, a group of compassionate people living near Newcastle had cared for the cats who made their home among the rocks of the breakwall, which juts out just under half a mile into the Tasman Sea. Through efforts to trap, spay or neuter (called “desex” in Australia), vaccinate, microchip, and return or adopt out each cat, this network of advocates and caregivers humanely reduced a cat population that at one time was 100 down to a stable number of 40.

This work, guided in part by trainings our president and founder Becky Robinson conducted in Sydney, was accomplished with the advocates’ own time and money. Their dedication was an enormous boon to the community and to the cats, who coexisted peacefully with Newcastle residents and the many tourists who visit to walk the breakwall.

The cats were even known to share meals with rakali, a semi-aquatic rodent native to Australia. The two species were sometimes seen munching on kibble together, mere inches from one another.

But none of these details are important to the Port of Newcastle. The leadership of the port chose to hire a shooter and pursued a lethal plan.

On the morning of Friday, December 18, 2020, caregivers arrived on the breakwall to find pools and trails of blood. Upon taking up a frantic search on Friday and Saturday, they discovered several cats had been killed and others injured and maimed, including through gunshots.

The following description of injuries some cats sustained are graphic, but they are important in understanding the scope of the situation.

One cat, Lily, had been shot in the head. Rosie was shot in the eye. Other cats had open wounds, broken legs, head and neck injuries, and bullet grazes the caregivers could not get close enough to assess. Traumatized, the cats kept their distance from everyone. Lily, now blind, was shot in the head and had to be rushed to the veterinarian for treatment. She made it through and is now safe in a new home as well.

Other cats were completely missing.

Shaken mentally and emotionally, the caregivers called law enforcement to figure out what recourse they had to such open brutality.

The police told them that the Port of Newcastle had ordered the attack. Therefore, the caregivers were not allowed to file a police report for cruelty.

A Hunt Under Cover of Night

In a statement, the Port of Newcastle said it is “responsible” for the breakwall and admitted that it had paid an “experienced” contractor to “humanely” cull the cat population. The Port claimed the cull was commissioned “in response to growing risks to the community and the environment” posed by the cats

The contractor carried out his grim task over the night of December 17, under cover of darkness. The result was a botched hunt that left cats mutilated and terrified.

Ironically, The Port of Newcastle condemned the outcome, saying in its statement that the situation was “distressing for everyone and does not meet our expectations nor align with our values as an organisation,” and claimed to launch an investigation into the matter.

However, the Port has failed to renounce its commitment to lethal approaches to remove the cats. Even after an outpouring of demands from the public to stop the killing entirely, the Port only agreed to hold off on more “cull” attempts until January 17.

Advocates immediately contacted Alley Cat Allies. We have since been working with the Animal Justice Party in Australia (AJP) and the cats’ caregivers in a fight to end future “culling” of cats. AJP’s Emma Hurst, Member of Parliament, is taking action in NSW parliament regarding the Stockton cat massacre.

Australia has an absurd and cruel agenda to exterminate all community cats. A government plan announced in 2015 had a goal to wipe out two million cats by 2020 alone, through shooting, poisoning, “toxic grooming devices,” and other barbaric means. Though they fell short of meeting that 2020 goal, the killing continues nationally despite the obvious cruelty and ineffectiveness of killing cats.

The slaughter is rationalized through false claims that killing cats is necessary to “protect” native wildlife. But no study or experience has proven that killing cats is effective in protecting wildlife, and the rhetoric used in Australia against cats is pure demonization and scapegoating.

Rather than take on the hard work of addressing the real environmental damage that human-led activities are causing to Australian wildlifesuch as climate change, habitat loss, pollution, deforestation, fires, mining, and toxic chemicalsthe Australian government has chosen to blame certain species.

Australian officials have spread propaganda steeped in junk science across the nation, giving cities and states carte blanche to carry out cat “culls” of their own. This attitude permitted and inspired the Port of Newcastle’s cat massacre.

We Must End the KillingImmediately

Since the night of the “cull,” the group caring for the cats has scrambled to ensure all injured cats receive treatment and to pull all members of the colony off the breakwall. While a protest in January attended by hundreds succeeded in temporarily stopping culls ordered by the Port, the caregivers fear for the cats’ lives if they stay. Though most cats have been pulled off of the breakwall in fear of future “cull” attempts, some cats are still living among the rocks. Their caregivers are working to protect them.

As of today, the caregiver group claims that nearly all of the breakwall’s cats have been removed and relocated, and only a few cats remain on site. Trapping efforts continue.

This should never have been a necessary course of action.

As Alley Cat Allies continues to fight to stop all future cat “culls” and gain justice for the breakwall cats, we want to make clear that the actions taken by the Port of Newcastle cannot be justified in any way. Port leadership displayed a disturbing and callous disregard for the life of sentient creatures by contracting a killer to shoot desexed, vaccinated, and cared for animals whose population was being successfully managed and who posed no risk to the community.

The only acceptable outcome is a pledge from the Port of Newcastle to reject any future “culls” on cats. What was done to the cats on the Stockton Breakwall cannot be allowed to happen ever again.