A Profile in Compassion: Jill Wojtaszek Jill Wojtaszek has never been afraid to speak out and step up for cats and kittens in her town of Port Jervis, New York. In the last six years, she started her own organization to provide Trap-Neuter-Return (TNR), veterinary care, and adoption, joined Alley Cat Allies’ Feral Friends Network®, and inspired the City of Port Jervis to support humane programs.

“I made myself available, made myself visible, never shut up, and was always willing to help anyone who called me about cats,” says Wojtaszek. “And, eventually, I was heard.”

A former veterinary technician, Wojtaszek jokes that protecting animals is in her DNA. She is dedicated to learning the best practices to help the cats and kittens in her care. When a concerned neighbor needed help with community cats in her yard, Wojtaszek researched and found Alley Cat Allies. With our materials and information, she learned about and carried out TNR for each of the cats.

Wojtaszek also worked with Port Jervis’ animal shelter to save the most vulnerable kittens in the community, including serving on the shelter’s board. But when the shelter stopped providing important services for cats and kittens, she decided to take matters into her own hands.

She founded Jill’s Ferals and set to work.

With help from partner veterinarian Dolores Roeder, DVM, Wojtaszek had more than 100 cats spayed and neutered, vaccinated, treated, eartipped, and returned within her first active months. She also socializes and adopts out kittens from all around the tri-state area of New York, New Jersey, and Pennsylvania. Last year, she had 135 kittens adopted.

“I’ve seen the difference. I’m no longer getting calls about 50 cats at a time on a property. Because I do TNR and help the kittens, they’re able to live out their natural lives” says Wojtaszek. 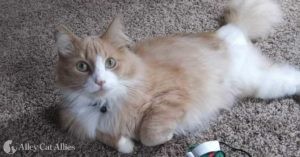 Chester (now named Wonder), a special cat Jill adopted out to a family who needed him.

As effective as Wojtaszek is on the ground, she knows change has to come from the top, too. Two years ago, when she learned about a family of 11 community cats on city property near the Delaware River, she went straight to Port Jervis’ Police Chief.

“I told him these cats needed to be neutered and that I would raise the money and do it myself as long as the city protected them,” Wojtaszek recalls. “I wanted to prove to them that TNR is what should be done.”

Wojtaszek carried out TNR for the property’s seven adult cats and adopted out the remaining four kittens. She also taught the city’s animal control officer how to trap and had the city build an outdoor shelter and feeding station. Today, a sign in the area declares the cats under the protection of the Port Jervis City Police.

The momentum continued. The City of Port Jervis put aside $2,500 just for spay and neuter vouchers in 2019, which Wojtaszek has already used to help 108 cats. The city also recently issued a proclamation for a low-cost spay and neuter clinic in August.

Wojtaszek is proud of her city and says she can’t imagine doing anything other than saving cats’ lives.