With a lush and untouched beauty, Oregon’s northwest coast is a rich paradise of moss, myrtle, and giant fern. Sea-chiseled rocks and gnarled trees line the coast, luring photographers and dazzling sightseers. It’s the reason my wife, Cathie, and I decided to travel there. I am a photographer, and Oregon is a photographer’s dream. 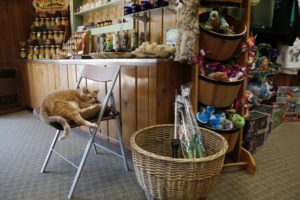 Feathers is one of two cats who lives in the gift shop at Prehistoric Gardens, an educational theme park in Port Orford, OR.

Every place we went, we saw huge, lava-created fists jutting out of the sea. We watched the ocean batter against the coast’s volcanic rock and explode in sprays of turquoise and navy. We pointed out the likenesses of sea monsters in the boulders, but we would soon see something even more remarkable as we drove along the coast.

Cathie was the first to spot the long neck of a Brontosaurus sticking out of a roadside attraction called Prehistoric Gardens, an educational theme park in Port Orford. The park is home to 23 lifelike concrete dinosaurs, including a Pteranadon, Tyrannosaurus Rex, Stegosaurus, and Brachiosaurus, which towers 46 feet from foot to crown. I grabbed my camera and we set out to explore. Lifelike concrete dinosaurs are the main attraction at Prehistoric Gardens—besides the cats who live there, of course!

Archaeologists have recorded that cats have lived among humans for about 10,000 years, though not in the time of dinosaurs, who disappeared 65 million years ago. Yet, we found two very real cats living among these giant reptiles.

Feathers is an orange and white tabby with a unique pattern of fur that resembles a soft feather fan. Buster is a gray and white cat. The cats are brothers, about 2 years old, and are well-fed and healthy. Buster lives at Prehistoric Gardens with his brother, Feathers, and loves to get attention from guests.

The minute we stepped into the gift shop, Feathers came over to us with vocal greetings. We chatted with him, and imagined he was telling us of what it’s like to be a cat among dinosaurs. Then Buster stepped up. He followed us as we went from one display of toys and stuffed dinosaurs to another.

While we found many breathtaking sights along the Oregon coast, such as lighthouses dappled in shadow and sun, twisted pine, jutting rocks, and a mist that rose up from the forest floor like the ghosts of time, we found none more interesting than Prehistoric Gardens’ dinosaurs, and the cats who live among them.