The Big Cat Public Safety Act is closer than ever to becoming the law of the land! The U.S. Senate unanimously passed the bill, and it now moves to the President’s desk for his signature. Thank you for taking action to protect big cats! 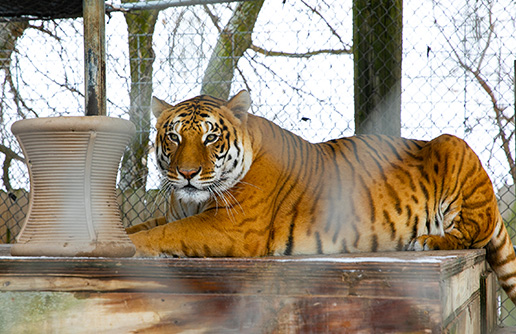 The U.S. Big Cat Public Safety Act is moving closer to becoming federal law, and we are asking for your help to keep pushing it forward!

The bill, also called H.R. 263, passed the House of Representatives with strong support from more than 60 percent of the representatives in the chamber. Next, we need it to pass the Senate so it can move to the White House and be officially signed into law. President Biden has already indicated his backing for the act.

Tell your senators to protect big cats and the public by immediately passing the Big Cat Public Safety Act, known as H.R. 263.

The Big Cat Public Safety Act would outlaw private ownership of Big Cats such as lions and tigers and put an end to cruel cub-petting schemes that rip cubs from their mothers for profit. In the absence of such regulation on the business of abducting, selling, and breeding Big Cats as “pets” or public attractions, it is estimated that thousands more lions and tigers live in captivity in the United States than live in the wild worldwide.

Specifically, the bill makes it unlawful for any person to import, export, transport, sell, receive, acquire, or purchase…or to breed or possess, any prohibited wildlife species,” which would include all Big Cats and Big Cat hybrids. In existing facilities where Big Cats are exhibited, the public would be prohibited from making direct contact with the animals.

This measure is critical to save the lives of both Big Cats and people, who are put at risk when wild animals are forced into unnatural and highly stressful conditions. But it will only happen if citizens like you make your voices heard. Please join us in urging your senators to pass the Big Cat Public Safety Act today.

Share this action alert with your friends and family throughout the United States! We need as many voices as possible if we want this act to pass.